What Right Libertarianism as an ideology entails

According to the Collins Dictionary, “A right-wing person or group has conservative or capitalist views.” Such a person will be an avid supporter of a laissez-faire economy, directly opposing policies such as income redistribution. At the same time, in terms of “conservatism”, they also have a more traditional approach towards politics, think the pro-life movement and Religious Freedom bill which sought to restrict the rights of LGBTQ+ individuals. Such an ideology seems pretty widespread in today’s world, with the election of former President Trump in 2016 and growth of right-wing politicians in Germany. It is an ideology that is easy to understand (though not justifiable). However, the confusing part comes in at the addition of the “libertarianism” clause. Libertarianism, as defined by Britannica, is the “political philosophy that takes individual liberty to be the primary political value.” This entails the emphasis on personal freedoms over politics and regulations.

See the contradiction yet? Right-wing ideology places emphasis on regulation of others, and in many cases the marginalised, yet libertarianism advocates for civil liberties. The Pro-life cause is perhaps the best example–at one end, it suits the right wing cause. However, at the same time, it is regulating the bodies of women, contradicting civil liberties and freedom. When broken down into its fundamentals, right libertarianism entails freedom in the business arena (often benefitting only the rich as corporations are awarded excessive liberties in business, paying little to no taxes and allowed immoral business practices) and increased regulation in other aspects (such as in the rights of marginalised as in the pro-life movement).

Thus, right libertarianism basically entails freedom for the free and oppression for the oppressed.

Ideologically, right libertarianism can also be observed on a ideological scale as follows:

Core beliefs of right libertarianism would include little taxes and regulations in terms of business practises. For instance, they would be inclined to think that the government should not intervene when oil corporations were to pollute lakes or even when white-collar crimes such as insider trading are committed (as mentioned by Harry Browne, Libertarian Party Presidential candidate in 1996 and 2000). 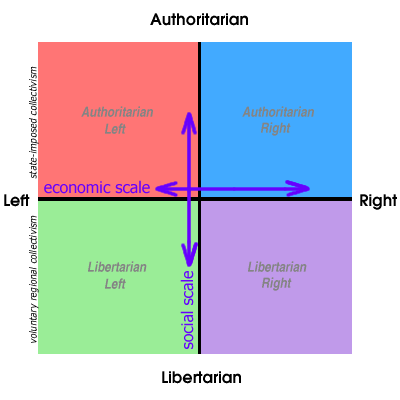 As mentioned earlier, the main perpetrators of the ideology in the government is the Republican Party, including people such as Donald Trump and Mitch McConnell, who you often see introduce tax cut bills but at the same time take a more conservative approach to social issues such as minority’s rights.

However, other key drivers of the ideology in the political sphere include Richard Mellon Scaife, John M. Olin, Edgar Prince (Betsy DeVos’ father) and of course, the Koch brothers. Hearing such names, you can automatically conclude that all of them are White. And yes, all of them are rich.

As with all political schools of thought, there is a need to lobby for support. However, this group does not do so with letters or protests, not hashtag campaigns or any of that “making their voices heard” stuff. They simply do not need to do so. Instead, they finance campaigns in order to infiltrate politics and have prominent politicians institute policies favourable to them when they are elected.

Prominently, you may have heard of the Citizens United v. Federal Election Committee Supreme Court case. For those who have not, Citizens United is essentially a Non-Governmental Organisation (NGO) where people can donate money to and have them donate the money to another NGO anonymously. Remember, when you donate money, you get tax cuts. However, the problem comes when these billionaires get tax cuts through donating when the causes they donate actually benefit them, be it in the long or short term. For example, Charles Koch heavily donated to right libertarian think tanks in Washington, which then benefits him again as right libertarian ideas get circulated in the political sphere. Thus, when someone like him gets tax cuts from making “charitable contributions”, those donations are not really “charitable” at all. They are selfish. Thus, not only does this mean less donations go to people who actually need it, it also calls into question the entire idea of donating for charity.

I cannot cover all the things that the right libertarians have done, but this one I really wanted to talk about, because of how genius yet dishonourable it is. The Tea Party movement was a Republican movement that occurred right after former President Obama was elected in 2008, as conservatives were shocked by the sudden election of a leader who at the time was considered to be extremely progressive. The movement, which carried racist undertones, lobbied for small government, little taxes, and reduction of national debt through less government spending. When the movement began, it looked like an actual grassroots movement where people were genuinely concerned about their place in a society that was anticipating a lot of changes.

However, many academics who studied the movement, including Jane Mayer, who wrote the book Dark Money on lobbying by right libertarians, concluded that the movement was mostly orchestrated by a few billionaires such as Charles and David Koch. These individuals were dissatisfied with Obama’s stance on the economy and wanted to go back to their ideals of less regulations and intervention in the economy. They then organised the Tea Party movement through Americans For Prosperity (AFP), an advocacy group that was right libertarian in principle and a driver of the movement.

There were even reports revealing that people who were protesting on the streets during the movement were paid to do so, and that the advertisements aired by “grassroots organisations” were paid for by the super-rich who were the main beneficiaries of the movement. The Tea Party movement that was started from the efforts of these billionaires were then able to gain some support from the actual population, mostly in Republican-dominated states such as Texas.

The movement, with AFP’s help, was quite successful. Many Tea Party-backed candidates in the 2010 midterm elections were able to win despite lack of experience and concrete action plans, yet 32% of the candidates who identified with the movement won their respective elections. Though they were largely unsuccessful in 2012 when they attempted to unseat Obama, many, including Sarah Palin, claimed that Trump’s success in the 2016 were due to the efforts of the Tea Party movement which cultivated an attitude of anti-establishment and small government among Republicans.

Yet, the key concern is the rich-poor disparity. This not only happens in the fact that richer people can more easily get their voices heard, but their advocacy for less government spending also means that less resources go to the poor, even when the government can afford spending that money. For example, right libertarians were extremely angered by the Affordable Care Act, arguing that it drained the country’s resources unnecessarily, but the Act was instrumental in helping lower income groups obtain the healthcare that they need.

To conclude, I hope reading this article has introduced you to the concepts of right libertarianism and that you learnt something new. Ultimately, right libertarianism is an ideology that really only the rich are able to stand up for. Its effects on the less economically sufficient parts of the population is damaging, yet people such as Charles Koch continue to expand the ideology’s influence and politicians like Trump continue to accept the influence of the rich in exchange for campaign money. We can only hope that the lower and middle class supporters of right libertarianism can one day realise the true implications of the ideology on them.

With great power comes great responsibility. View all posts by The Origin*