When one thinks of horror movies, the first thing that comes to mind would likely be something similar to the Michael Myers mask from Halloween, the Scream mask or something in the same vein. However, the world of horror and thrillers is much more varied than you would expect, finding its footing through the decades with changing societal expectations and the constant redefinition of what scary is all about.

In this article, we will be listing and reviewing 3 of the most culturally significant horror movies in chronological order, from the 1960s to the 2000s, depicting the impact they had on society, along with the impact society had on them before evaluating them as a whole

The 1960s was a time full of change and shifts in culture. Prior to this film, many horror or thriller-based films revolved around elements of the supernatural or monsters. Examples include films like Frankenstein (1931) and The Invisible Man (1933). Psycho marked a cultural shift towards more daring and gritty topics, creating the element of horror through the familiar.

Psycho presents the story of an office worker, Marion Crane, who is trusted by her employer to bank $40,000. She sees this as an opportunity to get away and start a new life, leaving town and heading over to her lover’s store in California. Tired after the long drive and getting caught in a storm, she gets off the main highway and pulls into the Bates Motel, run by a quiet and soft spoken man named Norman Bates.

In one of the most iconic movie scenes in history, Marion is hacked to death in the shower by a barely visible old woman. It is later understood that this old woman is supposedly Norman’s mother, however, it is later revealed that she died in a murder-suicide 10 years prior. Norman killed her and her lover out of jealousy, recreating her as an alternate personality called “Mother” that killed any woman that Norman fancied. “Mother” was simply Norman dressed in an old dress and wig, in complete delusion and with violent tendencies.

The subject matter and graphical violence shown in this film were revolutionary for the time it was shown. In fact, it was shot in black and white simply because Hitchcock knew that it would not get past censorship if it were shot in colour. It sparked a revolution in cinema, which saw a shift from classical and fantastical to violent and gritty. A shift from where evil was seen in the form of disfigured and ghastly monsters to perfectly normal-looking people, like Norman Bates.  The film pushed the limits of the strict film censorship rules known as the Motion Picture Production Code.

Hitchcock used the power of suggestion to skirt past the code, using black and white to show the blood going down the shower drain. Despite being known for its depiction of sex and violence, the film never shows complete nudity nor the actual slashing of the knife.

While it may seem tame to audiences of the present, it was highly shocking to those of the 60s. With a jarringly unique villain and the shocking level of violence for that time, cinema was never the same since its release.

The Shining (1980) is the cinematic adaptation of the best-selling novel by renowned author Stephen King. The Shining today is a well-known horror classic, having inspired many subsequent horror movies with everything from plot to filming techniques. Society’s fascination with this movie can be seen from the countless references to it in different media, the creation of popular Halloween costumes inspired by the movie and even memes of the famous line by Jack Nicholson: “Here’s Johnny!”.

The Shining is about the stay of a family at the infamous Overlook Hotel. Jack Torrance, a struggling writer, is able to secure a job as the winter caretaker of this hotel in Colorado, and brings his wife Wendy and their son Danny with him. When they arrive at the old yet grand hotel, it is evident just how isolated it is. It also becomes clear to the viewers that Danny has telepathic abilities, also known as his “shine”, as he is able to see both past and future visions of events. This also includes the terribly gruesome counts of familicide and suicide that occurred in the past at this hotel. As time passes and Jack’s writing fails to take off, combined with the creepy supernatural powers at play at this seemingly haunted hotel, he slowly spirals into madness and eventually tries to kill his family.

While the combination of cold winter isolation, shady characters and a child with supernatural abilities at the setting of previous gruesome murders seem just the ingredients needed for the perfect horror movie concoction, the director Stanley Kubrick also went against what was normally considered integral parts of horror at the time. For example, a significant part of the movie takes place during day time and not at night where the dark would have helped to build the creepy and unsettling atmosphere that most viewers are used to when watching horror movies. The use of gore is also relatively tame compared to other movies at the time. Instead of portraying over-the-top graphic violence usually associated with horror, it still manages to capture the feeling of “horror” and unease by adopting a slow build-up of apprehension and the feeling of impending doom. This also influenced the landscape of horror movies that followed as many of them would draw inspiration from ‘The Shining.’

‘The Shining’ however is not just a story of fatal cabin fever, it encompasses much more. Early in the movie, the history of the hotel is briefly mentioned – it was built on a Native burial ground and many of the past guests that had come to stay at the hotel met harrowing ends. This can be seen from the multiple encounters with ghosts throughout the movie by the different characters. For example, the two twin girls that little Danny runs into, are the daughters of Charles Grady, a previous hotel caretaker who killed them and his wife during their stay at the hotel.

The theme of reincarnation is also suggested throughout the movie. When Jack is having a drink at the bar, he makes small talk with the ghost butler Delbert Grady who tells Jack that he has “always been the caretaker”. Even more chilling is the final shot of what appears to be Jack inside the ballroom of the hotel in 1921, which is around 50 years prior to the timeline in the movie (1970s). 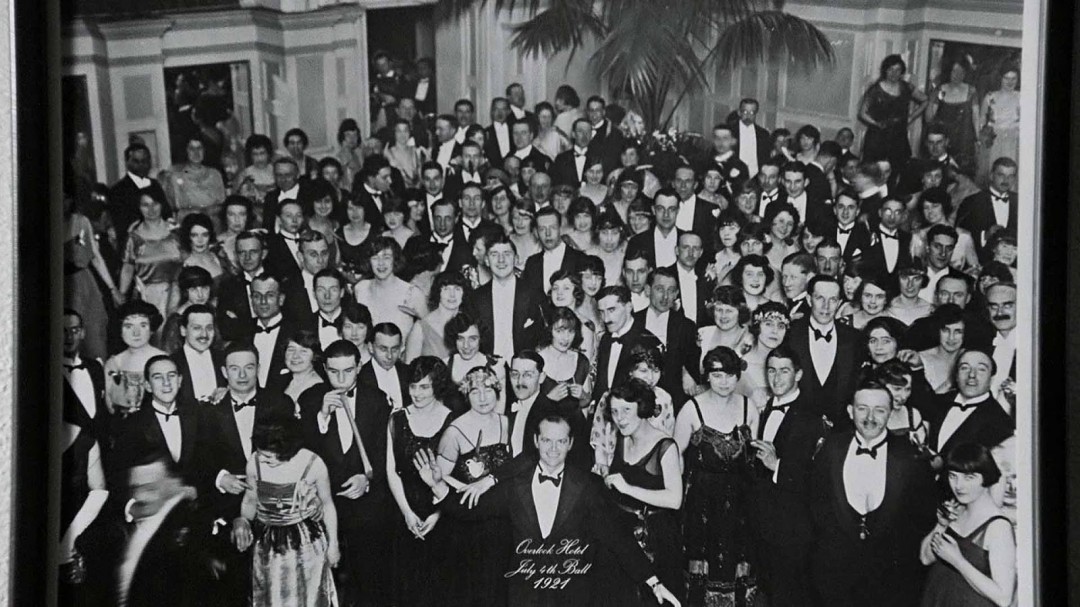 With both aspects of horror, the real and supernatural, covered in the movie, what is the message behind it? Is it to showcase the sinister horrors humans can inflict on their own families? That we should avoid haunted places at all costs?

People have been studying this movie for decades after its release, exploring the established recurring themes of madness, the supernatural, twisted and abusive family relations etc. So did Jack simply go bonkers or was he possessed by an evil spirit of the hotel? Did the awful crimes of building on a burial ground and cruelly driving out Native Americans while doing so, doom the hotel and its visitors? I think the fact that viewers can interpret for themselves is what makes the Shining so captivating.

David Fincher’s 2007 film follows the true crime story of the infamous Zodiac Killing Spree (carried out by the elusive Zodiac killer) that terrorised America in the 1960s. The film has been praised to be one of the most historically accurate true crime films, getting several notable details of the actual case down. These include the eyewitness testimony by the Zodiac’s only surviving victim, Micheal Mageau and a meeting between an alleged murder suspect and the lead investigator.

The Zodiac killer was portrayed as an attention seeker which is highly unusual. In most cases, killers tend to silently commit their crimes and fade into the background. However, the Zodiac has persistently tried to make himself known and feared in the California Bay Area since day one. From sending the San Francisco Chronicle numerous letters detailing the evidence of his murders to audaciously calling the police to report his own murders and even calling into a live broadcast; The Zodiac has spared no opportunity to bask in the “limelight”.

The Zodiac is seen to be a menacing figure with pinpoint precision for his targets. The killer singled out San Francisco writers, Paul Avery and Robert Graysmith by calling up their home landlines and even sending death threats to their offices. The killer is extremely calculative, leaving behind zero evidence- so much so he can openly mock the police’s failed attempts to catch him, calling them the “blue pigs”. These actions drive home the narrative that the Zodiac is not your run-of-the-mill murder, but an ominous force that’s not to be trifled with. Finally, the film makes it a point to never tell the story from the perspective of the Zodiac himself, with audiences never having a face to pin on the crimes. This emphasises the maddening reality of the ever-elusive identity of the killer and the presently unsolved nature of this case.

All in all, the Zodiac is a captivating piece that tells the tragic story of young lives lost at the hands of a cold-blooded killer. While the Zodiac mirrors similar levels of psychopathy as the killers of the first two films, some may argue this film is the most chilling one of all given it’s based on real-world events.